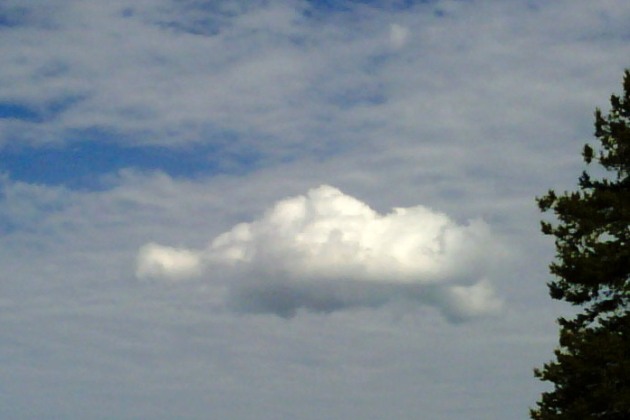 I walked the ruins of Louisbourg on a cold day in August, gazing across the sweeping landscape, across what had once been streets bustling with activity, now quiet, the faint rectangles etching out the buildings of this former town, their edges barely delineating a crumbling existence.

I looked back to the reconceived structures and then to the water, where supplies took too long to arrive, the dream slowly dying when too little became too much. They held on until they were overrun; the life of Louisbourg as it once was slowly fell apart.

I don’t know if the goosebumps came from the mist streaming in off the Atlantic or the ghostly chill of the place itself, but they were there nonetheless. My visit occurred in 1999, and I still remember that sense of “feeling the history” quite vividly. 2013 marks the 300th anniversary of the founding of Louisbourg, then the capital of Île Royale (Cape Breton Island) and the celebrations at the Fortress of Louisbourg National Historic Site of Canada continue through what remains of the visitor season.

Similar experiences also await to the north and the west, at the many forts and other historic sites that dot the landscape of what was once Lower and Upper Canada. Exploring the Fortifications of Québec National Historic Site of Canada and the spectacular heritage architecture of Québec City is magical. There remains a symphony of strength here; a decadence of beauty and strategy. History is everywhere you look, and there are many mesmerizing vistas to behold. A photographer’s dream, Québec City is one of the most attractive urban centres in the country, set against the breathtaking backdrop of the St. Lawrence River.

Fort Henry National Historic Site of Canada, in Kingston, Ontario, has a vibrant interpretive program, with drilling re-enactments and plenty of stories about nineteenth century British military life. There are many cavernous tunnels to explore and dramatic views looking down to Lake Ontario. Fort Henry is the kind of site that children and adults enjoy equally. Some say it’s haunted, by the way.

Canada as a nation is relatively young compared to others, but it has a long memory and a very old soul. These are just a few examples of the places that create lasting memories as well as a new appreciation for life then and now in this great country.

Capturing through the camera lens the pure essence of what your eyes witness of the world is an elusive goal for most of us. “You should have seen it in the real,” we say, shaking our heads. “It was so much better.”

But Sebastião Salgado brings us that real, and it is startlingly beautiful, and at times, difficult, because these are not simple stories to share or to receive, evoking a complex mixture of emotions about this narrative of life unspoiled.

His exhibition, Genesis, on display at the Royal Ontario Museum through to September 2nd, brings us sweeping landscapes and sharply focused edges. Depicted are layers upon layers of nature still untouched by human hands, as well as human hearts and minds untouched by popular culture.

Landscape and life blend together, a thin veil between them as camouflage, protecting from outside forces. Black and white mix with grey and silver, patterning in dimensions and new perspectives, disguising truth and then revealing it in a kaleidoscope of earthly design; of humanity.

Despite the razor sharpness of some elements, there remains a certain dreamlike quality, cradling the viewer in an almost otherworldly comfort, as an arm around shoulders.

For those who have all but given up on perfection, you will find it here, both in the photographs and the subjects portrayed.

It seemed fitting, somehow, that a surprise summer rain shower was just starting to wash the grit from the sea of asphalt and concrete as I left.