Whatever happened to those perfect jeans? The ones for class as well as for going out dancing? Back then, the latter typically meant “bar with dance floor” and no glittery club apparel was required. They were the “boyfriend-fit” blues; found in vintage stores and worn by someone else’s boyfriend many times before I acquired them.

Nothing could beat those softly distressed darlings that fit with a gentle but firm hug of the hips, loose enough on the waist to require a thick leather belt, and relaxed through the thigh. They left something to the imagination – a key ingredient often lacking in fashion these days – but were still decidedly fetching.

The few contemporary versions that dare to come calling by the same name are either “destroyed” through machine-made rips or very poor replicas of the original. They are not the comfortable-as-pajamas, relax-by-the-fireside variety worthy of a soft drink commercial.

Contrast the jeans of yore with the super-skinny leggings type that sadly continues to saturate the market. These show-it-alls somehow manage to be tighter than a second skin and often create unhappy results (witness the pervasive force of the “muffin-top”). They are truly the most unforgiving garments known to woman. And on men? Oh, please, no.

There are boot-cuts, I suppose, but they lack sit-ability. If you want to be comfortable in these, you’ll be standing. But boot-cuts are still preferable to their predecessor, the mega-flared bell-bottoms wide enough at the ankle to trip over the fabric and barely breatheable everywhere else. If they were boyfriend jeans, they’d be Robert Plant’s in 1974. And it took some serious rock star-quality guts and glory to pull them off – and to get them on in the first place, much like the designer jeans that followed in the early 80s.

The procedure for fastening freshly washed designer jeans was as follows:  while flat on the bed, hold in your breath, suck in your gut and apply a metal hanger to hoist the zipper. There was no stretch in denim then, and you had to “break in” your jeans like shoes. Heaven help you if they went too long in the dryer.

But the modern-day 180-degree alternative, o dread, is the high-waist “mommy jeans” style reminiscent of the late-80s fashion blunders some of us barely survived the first time around. Sorry, but no.

I took the debate to my friends and while there was lively dialogue defending boyfriend-fit and boot-cut, there were no passionate nods to the super-skinnies, bell-bottoms or mommies. One woman summed it up nicely, saying she simply wanted something that made her assets look their – uh – its best.

After a multitude of fruitless web searches and in-store disappointments, I followed the proverbial yellow brick road to a certain she-she denim mecca. And there, as if I were a jubilant Dorothy clicking her heels together, I found the way home to my old boyfriend: the “low-rise loose.” Not only are they the perfect boyfriend-fit jeans, they are stonewashed to the point of feeling like silk – silk pajamas, that is. And I’m dancing again, even if it’s just around the kitchen. 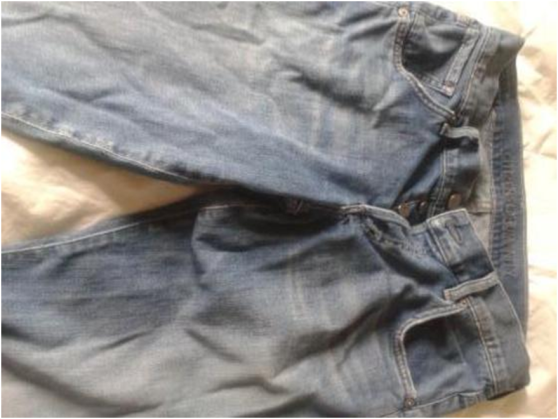